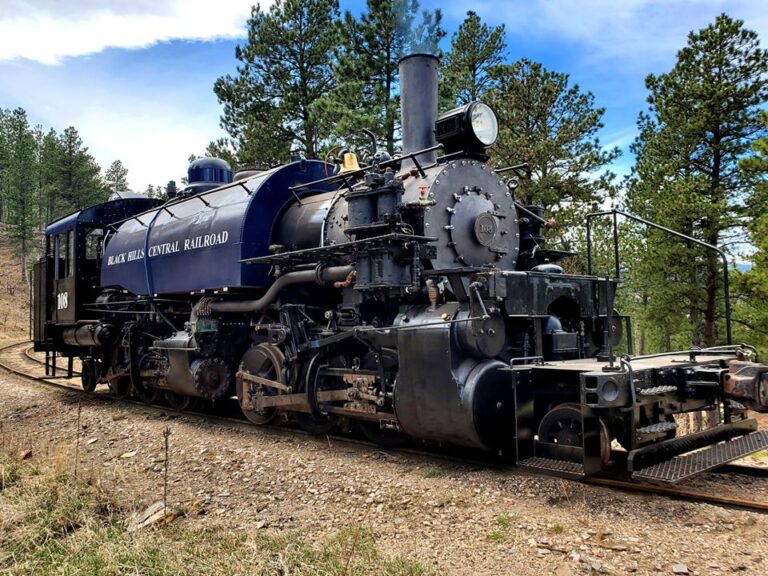 Journey through the Hills by Train

Are you ready to take a journey through the Black Hills by Train? Then you can’t miss the 1880 Train that ventures between Hill City and Keystone.

The first step is selecting the car to ride in. The Edward Gillette, Bluebird, Orville, Keystone, Rochford, Battle Creek and Hilyo are enclosed, have padded seats and glass windows. The Redfern, Harney Canyon, and Mystic have vintage wooden seats and open windows. Harney Canyon has lower windows and may be the best for younger rail fans to ride in. The Bluebird is wheelchair accessible. Toot! Toot! All Aboard!

Your trip on the 1880 Train is just over 9.5 miles one way. It takes about 55 minutes from Hill City eastbound. Westbound from Keystone, it takes a few minutes longer due to the steep inclines.

Each mile on the track gives you something new to see and learn about. Listen to the narration and the host to find out more about the history along the track. Look for the white mile markers along the track. The following gives an idea of what to look for during your ride from Hill City to Keystone and back.

The Hill City Station is the headquarters of the 1880 Train and began in 1875 as a placer mining camp. Today, the lumber industry and tourism are vital to the town’s economy.

After rolling out of the station, the train turns eastward up Tin Mill Hill, one of the steepest grades (4 to 6%) in the U.S. This puts a strain on the steam locomotive, so the fireman usually blows sand through the boiler flues at this time to clean them. Do you see the falling sand? Do you see Spring Creek to your left running through one of the city parks?

At the top of Tin Mill Hill, you get your first view of Black Elk Peak to the south. It is the highest point east of the Rockies at 7,244–feet tall. Ponderosa pine, which is the most prominent tree in the Black Hills, can be seen. When in bloom, you can see wild yarrow, black-eyed Susan and wild bergamot dotting the landscape.

Kennedy House between Mile Markers #2 and #3

Do you see the old telegraph pole on the south side of the track? It still stands as a testament to the first texting technology! The Kennedy House (which miners used for a school, store, bar and hospital) still stands.

Good Luck Tungsten Mine between Mile Markers #3 and #4

Next, you travel near Addie Camp, an old mining camp from the 1880s. The Good Luck Tungsten Mine is to the North. Tungsten was used to harden steel during both World Wars. Coming into Palmer Gulch, don’t miss your second, picture-perfect view of Black Elk Peak to the south! You’ll also get a glimpse of aspen and birch trees on this stretch of track.

Between Mile Markers #4 and #5

You are now going up, up, up to Oblivion, the original destination for the 1880 Train in the 1950s. The track was originally standard-gauge. A third rail was laid inside this to make it narrow-gauge for the first tourist train, but only to Oblivion. The white “End of Third Rail” sign warned engineers that they couldn’t go forward because the rail stopped. They had to turn around on narrow-gauge wye track and return to Hill City. This area was later used as one of the sets for the TV movie “The Orphan Train” in 1979.

The train travels into a pleasant, open meadow called Leaky Leaky Valley for the many natural springs in the meadow. It lies in the shadow of Elkhorn Mountain to the south. At the end of the meadow, the tracks cross over the Centennial Trail, which is a 100-mile hiking trail from Bear Butte to Wind Cave National Park. It was built in 1989 to commemorate South Dakota’s 100th birthday of statehood.

Next, you will see the towering Harney Granite cliffs to the north. As you go down the canyon, Old Baldy Mountain is in the distance at 5,500–feet tall. Do you see a tall, wooden cross erected on top of a hill to the north? Across from that is Camp Judson Baptist Camp which rests on the site of the old Pine Camp community and the Overgaard Sawmill. Don’t miss Battle Creek waterfall to your left. Several varieties of trees come into view, including bur oak, Black Hills spruce, birch, aspen and more.

While traveling through Echo Valley, this is the closest the train comes to the backside of Mount Rushmore National Memorial, which is about a mile away. Sometimes our whistle can even be heard at the Visitor Center! Kemp’s Kamp is to the north and folks there like to wave at the train. Do wave back!

Near the Keystone Junction between Mile Markers #8 and #9

To the south is Lafferty Gulch, once a mining community, now a group of summer homes. Up ahead is Keystone Junction, which was erected in 1972 when a flash flood damaged the track into Keystone. The Burlington Northern Railroad decided not to rebuild the line into Keystone and, instead, built a siding for loading freight and 1880 Train passengers one mile short of the city. (The track into Keystone was rebuilt by the Warder family in 2001.) In this area, the train pulls through the longest and deepest cuts in the rock. Try to catch a glimpse of the many marmots (sometimes called woodchucks) running along the tracks.

Coming to the Keystone Station

Coming to the end of the line is the town of Keystone, created at the turn of the century to work the Holy Terror Mine. It is from here, along Highway 16A to Highway 244, that leads to Mount Rushmore National Memorial.