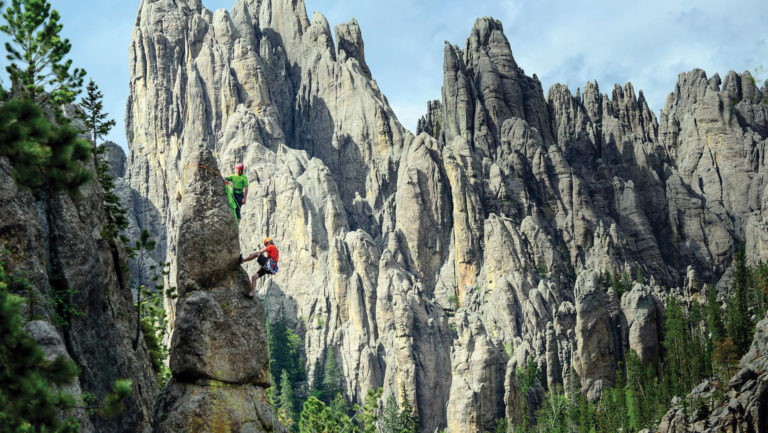 Rock Climbing in the Black Hills

With the many varieties of rock formations in the area, the Black Hills are an ideal destination for both beginning and experienced rock climbers. The Black Hills region has been featured in several climbing magazines as a hidden oasis for climbers. Are you ready to discover our secret?

If you’re new to the sport, learn the basics and get some rock climbing experience with the experts at Sylvan Rocks Climbing School. Durations from three to six hours are available. Climbing areas include Custer State Park, Devils Tower, Mount Rushmore area, and Palisades State Park.

The Needles in Custer State Park have drawn rock climbers to South Dakota for decades. These eroded granite pillars, towers, and spires provide both challenging routes and easy routes.

Popular climbing areas in the park include Cathedral Spires, the Outlets, and the Needles Eye.

While you won’t be able to climb on the four faces, the area around Mount Rushmore offers amazing pegmatite granite climbing.

Located in the Wyoming portion of the Black Hills, Devils Tower has approximately 4,000 climbers per year. The laccolithic butte is composed of igneous rock and rises 1,267 feet. The summit is a shocking 5,112 feet above sea level.

Hiking in June is not recommended, as local Native American tribes consider the site sacred and hold ceremonies at the monument in this month. While climbing is allowed, it is considered disrespectful for climbers to come at this time.

Spearfish Canyon is a hidden gem for rock climbers, with few other climbers, beautiful scenery, and lots of limestone rock. Climb among waterfalls, forests, and streams on the almost 600 routes in the area.

Rapid City is the gateway to the Black Hills and offers a number of fun spots for climbers at limestone canyons and boulders.

Remember that rock climbing can be dangerous, but if done right, it’s a great sport for the entire family. Make sure to sure proper equipment, wear a helmet, and research routes before going. If you are a beginner, take classes to ensure you are ready before going out on your own. Go in a group, and let people know where you’re going and when you’ll be back.