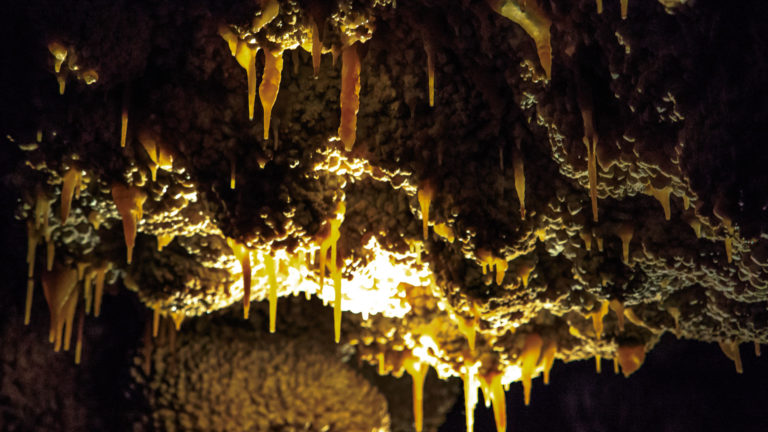 The one thing Jan & Herb Conn loved more than adventures was each other. The husband and wife team were prolific cavers and rock climbers, having discovered much of Jewel Cave and completed the first ascents of many peaks in the Black Hills.

Both Jan and Herb Conn were born on the east coast — Jan in Maryland and Herb in upstate New York. They met and were married in 1944. The couple called Washington DC home, where Herb was working as a civilian electrical engineer for the Navy during World War II. In their spare time, they began rock climbing in the area around DC and became hooked.

In 1946, they decided to pack up their belongings and hit the road. For five years, they traveled around North America in their camper to climb. They worked odd jobs, like at a New England ski resort and an Arizona dude ranch, to support their explorations. Jan once was hired for a job from a help-wanted ad that asked for an experienced Venetian blind assembler. The night before starting the job, she took apart and reassembled a set of blinds – showing up on her first day with enough experience to do the job.

Their travels eventually took them to the Black Hills where they fell in love with the many climbing opportunities and beautiful landscape. One of their favorite climbing destinations was the Needles in Custer State Park. In 1949, they bought land near the Needles and built a rustic cabin that they called Conncave. It is here that they lived, without electricity or running water, for the next 60 years.

It was in this part of her life that Jan made one of her first significant climbing accomplishments when she became the first woman to free-climb Devils Tower in Wyoming. To make extra money, Herb did maintenance work on the faces of Mount Rushmore one week per year for years; Jan taught music lessons.

In 1959, they decided to take a chance caving after their friend Dwight Deal asked them to accompany him on his exploration of Jewel Cave, which was then considered a small cave. Jan and Herb got hooked on caving and spent the next 22 years exploring Jewel Cave almost weekly.

They wrote a book about their explorations in the cave, entitled “The Jewel Cave Adventure.” It was through their work that Jewel Cave became known as one of the longest cave systems in the world.

Jan and Herb Conn were inducted into the South Dakota Hall of Fame in 2011. Herb died in 2012 at the age of 91. Jan still lives near the Needles at Conncave.

They completed over first ascents in the Black Hills, explored and mapped out a large portion of Jewel Cave, and traveled throughout North America. Even though Herb has now past, the memory of the climbing/caving couple lives on.