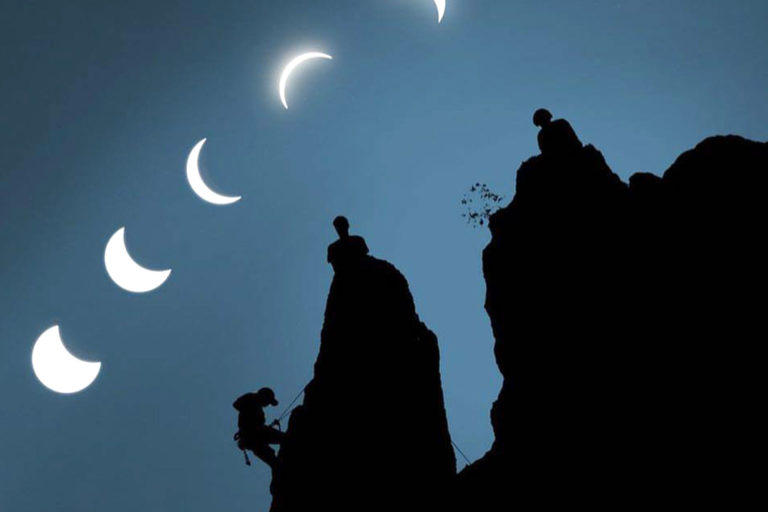 Behind the Shot: Composite of Rock Climbing During the Eclipse

Rock climbing on the Needles in Custer State Park is adrenaline-pumping enough, but during the Great American Eclipse on August 21, rock climbing was an otherworldly experience. This is exactly what Bonny Fleming of Bonzeye Studio in Rapid City shot during the eclipse.

“I wanted to get something different from what everyone else was shooting,” Bonny said. She got what she wanted, the photos went viral with over 1,400 shares less than a day after she posted it. The Instagram photos have been shared by popular photography accounts and even shared by a clothing company.

“Each photo is having its own viral journey, which is interesting to watch,” summed up Bonny.

Like most great pictures, the photos were a spur of the moment shot, but a meticulously planned out and composed shot. She researched which filters to use, how to photograph the eclipse, and took five trips to the Needles to find the best spot to get her shots.

She chose the Needles because of how iconic and recognizable they are as a Black Hills landmark and they are tall enough that they can get in a shot when the sun is high in the sky. The Needles are an area in Custer State Park with unique rock formations that are thin and tall, hence the name. They are popular with hikers and rock climbers.

“My original intention was to just get the spires in the shot, but then I thought: ‘it might be cool to get some people in the shot.’ Then, my nephew, who is a climber, requested senior pictures of him climbing. I thought it would be a unique senior picture opportunity, and obviously he was very excited to do it.”

This presented another planning aspect into the already complex photoshoot. She worked with a friend to plan the logistics of her nephew hanging off a cliff during the eclipse. She planned where he would climb and where she could stand to line the sun up in the background.

“The sun was still so bright, even when it was almost completely covered, that it was over exposing the photograph, so that was the challenge. I had never done it before, so having to change lenses and filters in the moment was difficult,” said Bonny. “It went by so fast, so getting the exposure right, and the guy in the right place was really challenging. So when I was just flipping through the camera right afterward, that the shots weren’t going to work out. It wasn’t until I got back and saw them on the computer that I was able to play with it enough to bring it out.”

Instead of eclipse glasses, she used a welding helmet, so she would just flip it up when she needed to see something better. The sun was in a different position than she had anticipated in her planning; she had to scale up a cliff last minute to reposition a tree out of the way.

“Those few minutes of partial totality were like a mad dash,” she said.

About 15 people and a mountain goat family found their way to the spot Bonny was using. The people all gathered here from around the country, and a few were even from Germany. At one point, two baby mountain goats ran through the legs of her tripod.

Her advice for photographers of the 2024 eclipse?

“Educate yourself [about how to photograph the eclipse], get the right gear like filters and lenses, and know how to use your camera.”