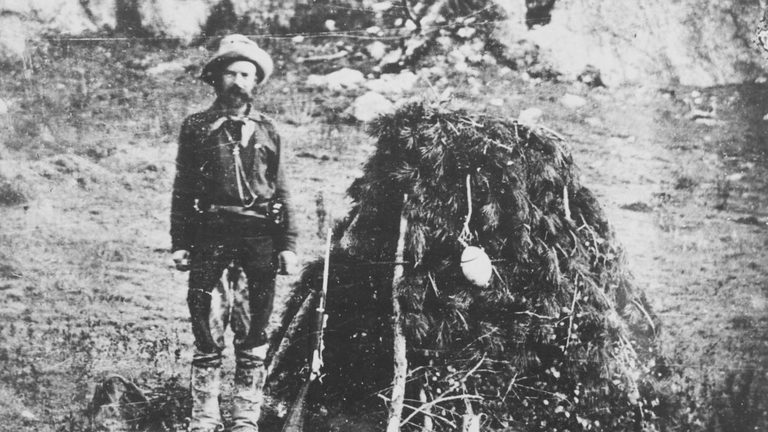 Whether you’re visiting Rapid City for the first time or have lived here your entire life, there are some fascinating chapters in our town’s history that aren’t widely known. Some are humorous, others a bit darker…but all are interesting! Here are three tales about Rapid City’s past you might not have learned about in school.

Rapid City’s founders were a demoralized group of miners unable to capitalize on the Black Hills gold rush. These 11 men—John R. Brennan, Martin Persinger, Thomas Gerguson, W.P. Martin, Albert Brown, William Marston, J.W. Allen, James Carney, William Nuttal, Major Hutchinson, and Samuel Scott—established a one-square-mile community along the banks of Rapid Creek in February of 1876, cordoned off six blocks in the center to be designated as a business district, and called it Hay Camp. Within six months, the new town—dubbed the “Gateway to the Black Hills” due to its central location midway between the plains to the east and mountains to the west—was home to more than 100 people, who sold supplies to the miners and pioneers streaming into the region. It was soon renamed Rapid City after the fast-flowing creek running through town. It soon became an important staging ground for supply-laden wagons and, during the late 1880s, a burgeoning railroad hub. By 1900, Rapid City had made a name for itself as a regional trade center for the Upper Midwest.

An Innocent Man was Hanged from a Tree

Dinosaur Park has been a top attraction for families in Rapid City since the 1930s, but the ridge it is located upon has a sordid past. In the earliest days of the town’s history, it was known as Hangman’s Hill—and on June 21, 1877, it lived up to its dark name. Three purported horse thieves were captured by a posse while they slept on Cowboy Hill (called M Hill today by locals) and brought to town for a hearing. Two of the men, A.J. “Doc” Allen and Louis “Red” Curry, admitted their guilt, but the third, James “Kid” Hall, professed his innocence, claiming he had only recently met up with the other two and been offered a ride on one of the horses already in their possession—an assertion the others backed up. Despite this, a mob mentality ruled, and all three were dragged up Hangman’s Hill by an angry crowd out for blood. Nooses were fastened around their necks and they were hanged from a tree. It was discovered the following day that the ropes used to hang the men were too long, causing a drawn-out strangulation rather than a quick death. Nobody from the lynch mob was ever tried for their crime. Some people report hearing unexplained noises resembling galloping horses in the area, and a few claim to have spotted a ghostly cowboy. The remnants of the tree believed to be used in the hanging can be found behind a black metal fence atop Skyline Drive.

An Early Mayor was a Jack-of-all-Trades

Valentine McGillycuddy, mayor of Rapid City from 1896-1898, was a true pioneer whose exploits read like fanciful fiction. Born in Racine, Wisconsin, on February 14, 1849—hence his name—McGillycuddy arrived in the Black Hills in 1875 as a doctor and topographer for the Newton-Jenney party. He is believed to be the first white man to scale Harney Peak, reaching the summit by assembling a makeshift ladder from a fallen ponderosa pine. After mapping the region, he served as a field surgeon for General George Crook, saw action during the Battle of the Rosebud and Battle of Slim Buttes, and attended to a dying Crazy Horse, cementing his reputation as an ally to the Lakota Sioux. He lobbied Washington, D.C. for better treatment of Native Americans and was appointed Indian Agent at Pine Ridge Reservation, but a political skirmish with Red Cloud cut that stint short. From there, McGillycuddy moved to Rapid City, built an impressive Victorian home, mingled with the city’s socialites, and was instrumental in bringing electricity to the region. In addition to mayor, he served as President of Lakota Bank, Dean of South Dakota School of Mines and Technology, delegate to the South Dakota State Constitutional Convention, and South Dakota’s first Surgeon General. He maintained friendships with many notable figures including Calamity Jane, Wild Bill Hickok, and William “Buffalo Bill” Cody. Following his death at age 90 in 1939, McGillicuddy’s ashes were buried in a box atop Harney Peak. His mansion, at 727 South Street in Rapid City, is still standing today and currently undergoing a major restoration effort.