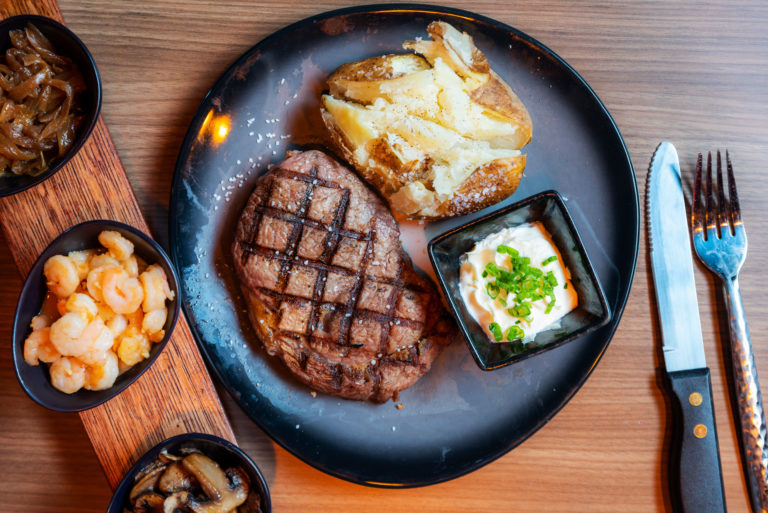 The saying “eat, drink, and be merry” is especially appropriate when on vacation. Part of the travel experience is sampling regional cuisine, and the Black Hills has a lot to offer. From unique dishes featuring ingredients you won’t find anywhere else to a burgeoning wine and craft beer scene, the area offers plenty of options to satisfy your hunger and thirst. The following represent a few of the iconic South Dakota experiences you shouldn’t head home without trying!

Buffalo were once a staple of the Great Plains, where herds numbering in the millions roamed the vast prairie freely. Their numbers have dwindled, but conservation efforts have led to a resurgence in South Dakota. Local chefs prize buffalo for its taste and nutrition; the lean meat has only 2.42 grams of fat per serving (less than chicken) and is higher in protein, lower in cholesterol, and has about half the calories as beef, making it a healthy red meat alternative. Buffalo isn’t gamey; it’s got a slightly sweet, rich flavor similar to a high grade of lean beef. For the best flavor, order yours medium-rare to rare; with so little fat, the meat can dry out quickly when cooked.

Buffalo burgers are the most popular preparation and readily available at restaurants throughout the Hills, but they’re just the start. Consider expanding your culinary horizons by trying a buffalo steak, meatloaf, stew, chili, jerky, or soup.

South Dakota’s state fish is abundant in rivers and lakes throughout the state. This flaky white fish has a sweet, succulent, mild taste that absorbs other flavors well. It’s widely considered the best-tasting freshwater fish and has very few bones. Walleye is a versatile fish to cook and can be prepared in a wide variety of ways, including baked, broiled, pan fried, grilled, poached, and sautéed. Around the Black Hills, you’ll commonly find it batter-fried, a process that seals in the juiciness and leaves it nice and crispy on the outside. Try ordering walleye fish tacos or fish ‘n chips. Another popular local dish is walleye “fingers” with fresh tartar sauce for dipping.

Few people outside of South Dakota are familiar with chislic, designated as the official state “nosh” in 2018. Derived from Turkish and Arabic words for “skewered meat,” chislic was introduced by German Russian immigrants in the 1870s. It was largely confined to southeastern parts of the state, but has been gaining popularity in the Black Hills in recent years. Nowadays, it’s a common staple on many local menus.

Chislic is essentially cubed meat that is deep-fried or sauteed and seasoned with garlic salt. It was traditionally prepared with lamb or mutton are traditional, but most West River eateries use beef. It is often served on a skewer or with toothpicks; classic accompaniments include crackers and a sauce for dipping, usually a tangy/sweet BBQ sauce.

Indian tacos are similar to traditional tacos but substitute fry bread (South Dakota’s state bread) for tortillas. When Native Americans were relocated to reservations, they were supplied with rations of flour, lard, salt, sugar, baking powder, yeast, and powdered milk. They used these meager ingredients to create fry bread, which proved to be the perfect vessel for Indian tacos. They are topped with ground beef and other traditional taco ingredients, including lettuce, tomatoes, cheese, refried beans, sour cream, diced onions, black olives, salsa, and more. These often-gargantuan plates are tasty and filling, the perfect way to wrap up a day spent exploring the Black Hills.

Wojapi is a traditional Native American berry sauce made with chokecherries. It’s similar to a jam or pudding, but usually made without sugar – purists let the fruit do the talking! Great Plains tribes took wild berries, ground them up with corn flour and perhaps a little honey, and made them into patties that were boiled until thickened. The sauce was often used as a dip for fry bread. Family recipes were passed down through the generations. Many chefs will substitute other seasonal berries such as blueberries, raspberries, blackberries, or cherries. You’ll find authentic wojapi in a handful of eateries around the Black Hills.

Christened the official state dessert in 2000, kuchen accompanied German immigrants to South Dakota in the 1880s. This traditional German pastry is sort of a cross between a cake and a pie; it’s made with a sweet dough and contains either a fruit or custard filling. Peach and prune are classic flavors, but local chefs use a wide variety of seasonal fruits when concocting these desserts. You might find kuchen made with strawberries, rhubarb, apples, blueberries, apricots, raspberries, raisins, pumpkin, and more. The great thing about this treat is, almost any type of filling will work.

These savory meat pies (pronounced PASS-tees) were popular with Cornish immigrants working for the Homestake Mine in Lead in the 1870s. A simple dish consisting of meat and potatoes wrapped in a flaky crust—forerunners to the modern-day Hot Pocket—pasties provided a nourishing meal for hardworking laborers. Their portability made them perfect for slipping into a lunch box, and the crimped crust served as a makeshift handle that could be discarded if the miners’ hands were dirty. Though the mine closed in 2002, pasties are still a delicious staple in certain areas of the Black Hills.

Not all of South Dakota’s unique cuisine is readily available in the Black Hills. These regional specialties are worth the drive if you’re in the mood for a foodie-themed road trip!

South Dakota’s state bird, the ring-necked pheasant, is popular with both hunters and diners. The high-protein meat tastes like chicken (no, really!) and is usually roasted.

This puff pastry, brought to South Dakota by Czech immigrants, features a soft, yeasty dough filled in the middle with fruit, cream cheese, or poppyseed, then baked and topped with a glaze.

Also called a runza, this savory yeast dough bread pocket is filled with seasoned ground meat (usually beef or pork), onions, and cabbage, and baked to a golden brown.

No tigers are harmed in the making of this relative of steak tartare. It’s actually a mixture of seasoned ground beef, green peppers, and onions, usually served on crackers.

This Norwegian flatbread is made with potatoes, butter, flour, and cream. It’s cooked on a griddle, rolled up, and served with a little butter and sugar.

South Dakota might not be the first state you think of when it comes to winemaking, but local growers have solved the problem of climate extremes by focusing on native fruits and cold-resistant French-American hybrid grapes to produce quality wines that have won prestigious national awards. Grape varieties such as Seyval Blanc, Marechal Foch, and Frontenac have adapted well to the climate of the Northern Plains, while fruits such as rhubarb, chokecherries, red and black currants, raspberries, and wild plum are turned into crisp whites and robust reds that run the gamut from dry to sweet.

The 50-mile Black Hills Wine Trail connects wineries in Hill City and Custer with charming tasting rooms in Deadwood. Knowledgeable sommeliers are happy to discuss the different varietals and suggest complementary food pairings. You’ll likely leave impressed (and toting a bottle or two of your favorite) over this under-the-radar but growing wine region. With recent write-ups in The New York Times and Huffington Post, South Dakota’s burgeoning wine industry might not be a secret much longer.

For every new winery popping up in the Black Hills, it seems there are two new breweries. In recent years, the region’s craft beer scene has been gaining momentum as locals and visitors discover quality beers featuring locally-grown ingredients. The number of microbreweries has tripled since 2007 and shows no sign of slowing, especially since the passage of a 2018 bill that increased production limits and allowed craft brewers to bypass distributors. You’ll find a wide variety of styles ranging from light, crisp lagers and wheat ales to hoppy IPAs and darker, heavier stouts and porters. Newcomers like sours and fruit beers are beginning to make inroads, as well.

The Black Hills are home to the state’s largest concentration of microbreweries. Custer, Hill City, Spearfish, Hot Springs, and Rapid City all feature local breweries offering a rotating selection of beers that change with the seasons. Grab a pint of your favorite or order a flight if you’re feeling adventurous (or simply can’t decide).

During the Roaring Twenties, Prohibition laws banned the sale of alcoholic beverages, launching the culture of speakeasy lounges and distilleries. In the aftermath of a relaxation of the rules regarding the manufacturing and distribution of spirits in recent years, South Dakota’s distillery scene is following in the footsteps of the state’s wine and beer industries and enjoying a quiet renaissance of its own. There may only be a handful of distilleries currently operating, but if recent trends are any indication, those numbers should grow. Whether you’re interested in whiskey or bourbon, vodka or rum, seek out an opportunity to try some of these one-of-a-kind spirits, many of which incorporate local ingredients like South Dakota wheat and honey. For a behind-the-scenes look at how your favorites are made, sign up for a distillery tour, which often includes sample tastings.

The popularity of cocktails is on the rise, with about one-fifth of drink consumers opting for spirits over beer or wine. Not to worry—there are plenty of spots around the Black Hills where you can quench your thirst, whether you’re craving a martini, Bloody Mary, margarita, or Manhattan. From high-class nightclubs to laid-back neighborhood bars, you’ll find a mixologist ready to create a cocktail perfect for your palate.

The Dakota Martini is a combination of beer and tomato juice garnished with green olives or pickle spears and an optional splash of olive juice. If this sounds suspiciously similar to a red beer, aficionados swear that pimento-stuffed olives set it apart.

Love the flavor of cocktails but looking to cut back on calories? Order your favorite drink as a mocktail instead. Most bartenders are happy to make non-alcoholic versions of classic drinks, substituting ingredients like club soda and apple cider. Some are so flavorful you might never go back to your old-fashioned Old-Fashioned!

It’s in the Water

Brewmasters in the Black Hills swear the local water is what gives their beers a unique flavor. These craft brews truly are one-of-a-kind drinks you won’t want to miss.

Save it for Later

Between your luggage and souvenirs, you might find yourself running short on trunk space during your Black Hills visit. Many local wineries and breweries offer shipping options, allowing you to enjoy your beverages back home without hauling them halfway across the country—and you won’t have to worry about ruining them in a hot car.