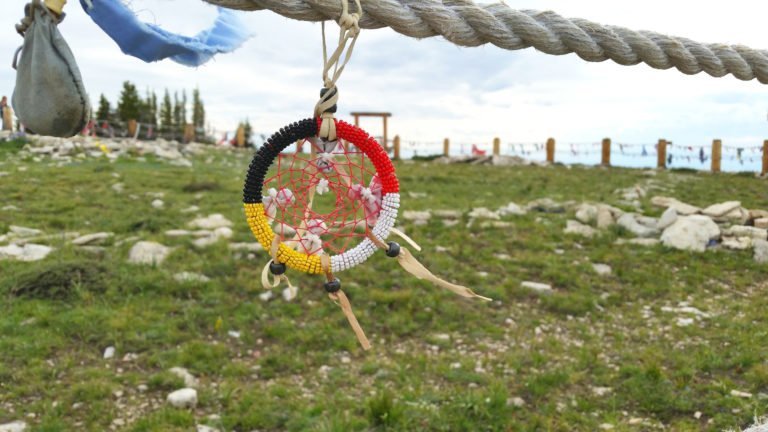 The Medicine Wheel Passage route of today’s US Highway 14A through the Bighorn Mountains of northern Wyoming is the modern trail near a significant historical and cultural site—the Medicine Wheel.

The Medicine Wheel, a circular arrangement of stones, measures 80 feet in diameter with 28 rows of stones that radiate from a central point to the encircling stone rim. Five smaller stone circles are placed around the rim of the wheel. The Wheel’s function and builders remain a mystery.

Archaeologists generally believe that the Medicine Wheel was constructed over a period of several hundred years sometime during the last 1500 years, and that prehistoric people have occupied the surrounding region for nearly 7000 years. Archaeological evidence supporting these beliefs includes tipi rings, trails, plant gathering sites, and sweat lodges.

To members of the Arapaho, Bannock, Blackfeet, Cheyenne, Crow, Kootenai-Salish, Plains Cree, Shoshone, and Sioux tribes, the Medicine Wheel is a unique and powerful spiritual site rich in oral and ceremonial traditions. To these peoples, the rock alignments and groups of stones represent sacred religious ceremony rather than archaeological data.

Some scholars and Native American historians suggest that the spoke-like structure resembles the “Medicine Lodge,” and its 28 “spokes” may symbolize the days in a lunar month. People sought the high mountain for a focal point in vision quests, spiritual harmony with the powerful spirits, and to make prayers and offerings.

The panorama of the Bighorn and the Absoraka Mountains provides a breathtaking backdrop for the Wheel. The spectacular views in all directions from the Wheel’s site are thought to recognize the spiritual ties of the persons that laid out the Wheel to the mountains and the rocks themselves.