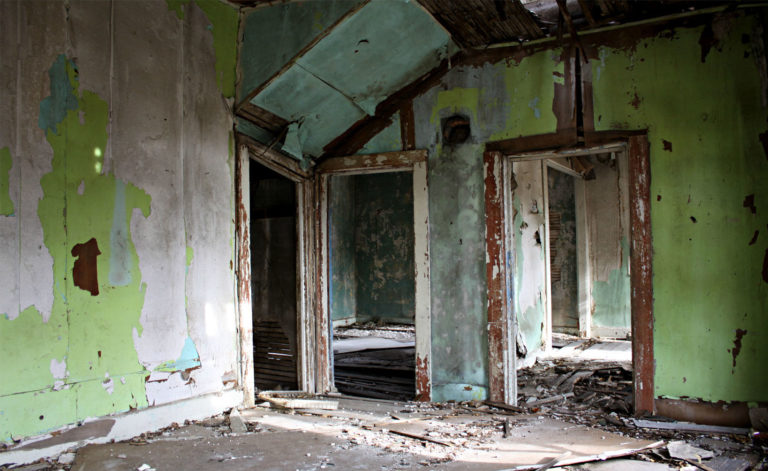 There were hundreds of mining towns formed during the Black Hills gold rush and later abandoned, but few have more than foundations left. Spokane is an exception, and is one of the most intact ghost towns in the Black Hills. The remains of the rough-and-tumble mining town can be found near Custer State Park’s northern edge.

In 1890, the Spokane mine began operations and a town of the same name formed around it. The mine was rich in silver, galena, beryl, copper, mica, zinc, and several more minerals. The town’s profits reached their peak at $144,742 in 1927.

The town was shook by the 1908 murder of a prominent resident named James “Jim” Shepard. He has a grave in the town that reads he was “murdered over a mining claim.” With his dying breath, Jim told the sheriff that a claim-jumper named Frank Cox shot him because Jim claimed the Spokane Mine. Frank had “jumped” the claim from the previous owner but had not kept up with assessment work. The small town turned on the Cox family. The dramatic trial ultimately decided that the evidence was insufficient and Frank was a free man.

In a July 10, 1909 issue, the Keystone Record covered the preliminary trial. The short article concluded by stating, “it is unfortunate for all concerned, and if Cox proves his innocence, and many believe he will, the chances are we will never know who killed James Shepard.”

In the 1940s, the mine’s minerals and profits dried up, and the town was gradually abandoned.

After hearing about the abandoned town, I knew I had to take a look.

As I walk the short trail from the road, the first building that comes into view is the schoolhouse. I climb through a ground-level window– the window panes are long gone. The floorboards creak under my weight, and it opens up into three rooms. In the main room, the walls are painted a bright lime green. In the other two rooms, the wallpaper is peeling and two other layers of wallpaper with pastel flower patterns under it are visible. The ground is littered with boards that have fallen from the upper level or the walls.

The stairs are covered in dirt and other debris from decades of being exposed to the environment. They are badly warped and complain when I step on them. As carefully as a mouse, I ascend the staircase, skipped over several with visible cracks and chips. The roof is mostly gone, with only support beams now visible. The clear blue sky can be see overhead.

Outside the schoolhouse, the town is hidden among the tall grass in the field and surrounding forest. I stumble upon car after car. Some still have steering wheels while others still have paint, but all are in terrible condition. There are several inconspicuous wells throughout the area, so watch your step!

A short walk away from the other buildings and hidden in the trees is the manager’s house. It was likely the last structure to be abandoned and is the only building that doesn’t look to have severe structural damage. Still remaining are several rooms, a kitchen, an upper level, and a cellar complete with a table and chairs.

What’s left of Spokane can be found near Custer State Park’s northern border off of Forest Service Road 330. There are no markers or signs indicating its presence, so keep your eyes peeled. There are two geocaches in Spokane.