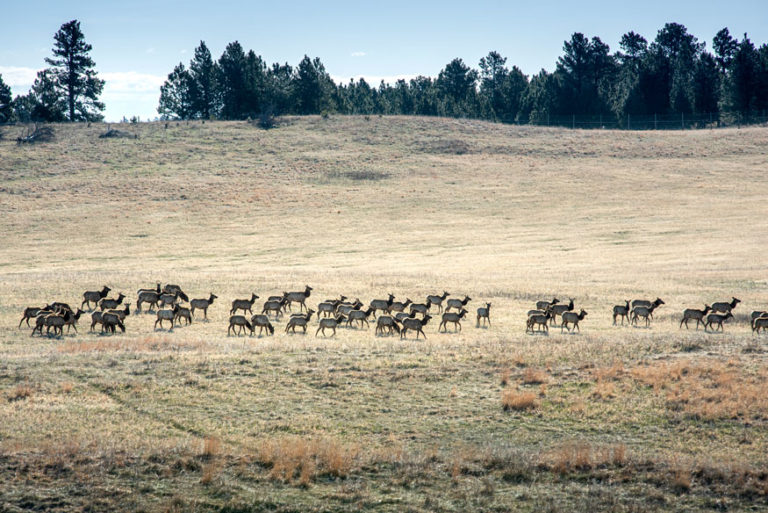 Where the Wild Things Roam

Black Hills residents are a bit spoiled. We’ve got beautiful natural scenery and an abundance of wildlife practically (and sometimes literally) right in our backyards! Locals know exactly where to go for their wild animal fix, but visitors aren’t always as savvy when it comes to finding our native fauna. Not to worry: we’ll help you in your quest for an authentic Black Hills wildlife experience!

No visit to South Dakota is complete without seeing bison (often called buffalo, though technically they’re a separate species). Majestic symbols of the American frontier, great herds roamed the Northern Plains freely up until the late 18th century, as many as 60 million in their heyday. Sadly, they were hunted nearly to extinction, with the population dwindling to only 541 by 1889. Conservation efforts have led to a resurgence; today, there are an estimated 500,000 bison in North America — and the population is greatest in South Dakota, which led all states with 33,637 of the creatures as of 2015. There are several sizable herds in the Hills, with the largest (some 1,300) in Custer State Park. Drive the 18-mile Wildlife Loop and you’re practically guaranteed to spot at least a few…and quite often, a lot! Wind Cave National Park is home to another large herd, which have 28,295 acres over which to roam. In 2019, bison were relocated to a more accessible site within Badlands National Park. They had been in the park since 1963, but confined to remote areas rarely visited by the public. The current herd numbers around 1,200. A smaller herd can often be spotted in and around Bear Butte.

These burrowing rodents, relatives of the ground squirrel, may be smaller than bison, but they are still an iconic symbol of South Dakota and can be found throughout the western two-thirds of the state. Named for their distinctive bark-like call, prairie dogs are communal herbivores who reside in complex underground colonies called prairie dog towns. Like bison, their numbers were once considerably higher — in the hundreds of millions — but today, their habitat covers only about 5 percent of its original range. Extensive prairie dog colonies can be found along the Wildlife Loop in Custer State Park; at the junction of Highways 385 and 87 approximately 1.2 miles north of the visitor’s center in Wind Cave National Park; and Roberts Prairie Dog Town in Wall (just before the entrance to the Badlands), where they are tame enough to be fed by hand.

Mountain goats aren’t native to South Dakota, but can often be found along the famed Needles Highway or scaling the cliffs around Mount Rushmore. If you’re wondering how they got there, they were originally housed in a zoo in Custer State Park in the 1920s. Within a few years, all six mountain goats had escaped, taking refuge in the crags and crevices of the Black Elk Peak range. Their numbers multiplied over the years; all mountain goats in the Black Hills are descendants of those original six! With such a vast territory to explore they can be elusive and difficult to spot, but your best odds are within Custer State Park, around Mount Rushmore, atop Black Elk Peak, and in the vicinity of Deerfield Lake.

These mammals have been domesticated throughout the world, but a feral pack — affectionately dubbed “begging burros” — has roamed Custer State Park for more than half a century. They were originally introduced as pack animals to help transport visitors from Sylvan Lake Lodge to the summit of Black Elk Peak. When those tours were discontinued, the burros were released into the wild, and quickly made a home for themselves within park boundaries. Their nickname is derived from the Custer State Park herd’s not-so-subtle requests for food from motorists driving the Wildlife Loop; they are not shy about approaching vehicles and sticking their heads inside open windows. It’s best to resist their attention, as they subsist just fine on the abundant prairie grasses within the park’s confines, but if you insist on feeding them, carrots and apples are good choices…though they’re not picky and will eat almost anything.

Often referred to as South Dakota antelope, pronghorn are named for the distinctive horns atop their heads but are unrelated to true antelope, which are only found on the African continent. As with other animals once common across the Great Plains, pronghorn numbers fell sharply to around 12,000 animals by 1915. Thanks to extensive conservation efforts, a little over 100 years later, their population is closer to one million. You’re unlikely to get very close to these animals, which have keen eyesight and can reach speeds of 60 mph, making them the fastest land animal in North America (and second in the world; only the cheetah can outrun them). They prefer grassy areas and can often be found along Custer State Park’s Wildlife Loop, though it often takes a keen eye to spot them.

Elk are the second largest animals found in the Black Hills; only bison are bigger. Despite their size and tendency to group together in large herds, elk sightings are much more rare. Blame it on the fact that they are wary of humans and typically congregate within the safety of ponderosa pine forests well off the beaten path. There are an estimated 6,000 elk scattered throughout the Black Hills; with a little patience and luck, you might be able to spot elk in Custer State Park or Wind Cave National Park, particularly in the vicinity of Rankin Ridge.

Efforts to maintain bighorn sheep herds in the Black Hills have proven tricky. Peter Norbeck introduced eight Rocky Mountain bighorns to Custer State Park in 1922 and the herd flourished until the 1950s before dying off. Additional attempts to bring them back have had mixed success. Most recently, bighorn sheep were released into the northern Black Hills, but disease and accidents have kept the numbers small. You are most likely to spot herds around Deadwood, Jewel Cave National Monument, Badlands National Park, and Elk Mountain.