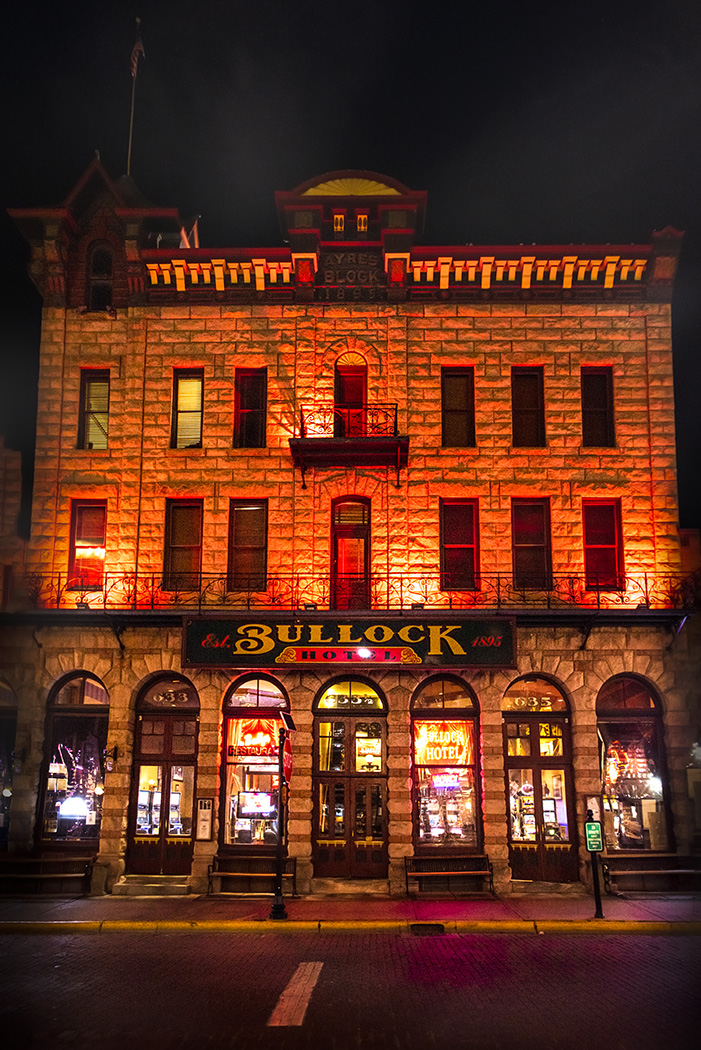 The Bullock Hotel: a Deadwood Original

The original building where the Bullock Hotel stands today was a hardware store and warehouse built by Seth Bullock and his business partner, Solomon Star. The pair arrived in Deadwood in 1876 with a wagon full of mining equipment, dutch ovens, and other household items they sold to the influx of gold prospectors. Their store prospered and even survived the fire of 1879. They weren’t so lucky a second time, however. In 1894, another fire ravaged Deadwood and took the hardware store with it, leaving nothing but the brick warehouse in the back of the building still standing.

Faced with rebuilding, Bullock and Star considered their options, and moved from a retail business into hospitality. They didn’t want to build just any hotel; they aimed to be the finest in the area. Rock was hauled in from a quarry in nearby Boulder Canyon, and niceties like brass chandeliers, oak trim, and red velvet carpeting were bought. The hotel’s dining room could hold 100 at a time and offered culinary delicacies fit for high society. They outfitted each of the 63 rooms with brass furniture, and every floor had its own bathroom — a luxury for the time.

The hotel quickly became one of the most sought after in the hills and continued to host guests in comfort until the 1970s. In 1976 the property was sold, and the new owners renovated it into a hardware store. With the legalization of gambling in Deadwood in 1989, downtown saw a resurgence of tourists and locals looking to get away. In 1991, the Bullock sold yet again and was converted back into a hotel. While few records of the original decor exist, they took every care to be as historically accurate as possible to the original design.

Today, the original 63 rooms have been renovated into just over 20. While there are fewer rooms, they are spacious and have their own bathrooms, rather than the original layout of one per floor. Guests can choose from deluxe rooms with two queen beds up to luxury suites with a king-size bed and jacuzzi. Room furnishings hearken back to the original decor of the hotel, but don’t sacrifice comfort for style — you’ll get a splendid night’s rest if the pillows have anything to say about it.

Beyond the hotel rooms, guests are treated to fine dining at Bully’s on the hotel’s main level. You can enjoy a meal and a handcrafted cocktail in plush velvet booths or next to an exquisite fireplace with a carved mantle reminiscent of the late 1800s. The name of the restaurant is not a shortened version of Bullock, but actually named for one of his lifelong friends: Theodore Roosevelt. The two were close in life; they served in the famed Rough Riders together, and later Vice President Roosevelt would appoint Bullock as the first Forest Supervisor of the Black Hills Reserve.

There is of course something that brings guests to the Bullock Hotel that has nothing to do with the amenities: ghosts. While the rumor persists that Seth Bullock died in one of the rooms, he actually passed away at home. When he was alive, Bullock was known to dislike idleness, and often chastised his employees when he found them being unproductive. Present-day employees of the hotel report feeling an uneasy paranormal presence on their breaks, and they quickly return to work. Another marker of his presence is the smell of cigar smoke; he was known in life for having an affinity for fragrant tobacco. Guests have also seen apparitions that match his description: a tall man with a cowboy hat, stern gaze, and unmistakable mustache.

Seth Bullock isn’t the only spirit that roams the halls. During the smallpox epidemic that hit Deadwood, the basement of the hotel was converted into a sick ward. Many Deadwood residents died, including several children. Guests of the hotel often report hearing children running up and down the hallways at all hours of the night, but when they open the door nobody is there. Apparitions of two young girls have also been seen in the hallways. When guests approach them to inquire about their parents, they disappear around corners or simply fade away.

The Bullock Hotel offers ghost tours of the property nightly that last about an hour. You’ll have time to explore Seth’s Cellar and the hallways in the basement where you can see damage from previous fires. The tour also goes upstairs, where guests complain of hearing children playing in the halls late at night and see pictures of apparitions captured by previous tour groups.

The perfect stay in Deadwood has three things: comfortable lodging, great food, and a central location to all the fun. The Bullock Hotel has it all, and as the original locale for high society in Deadwood, you can guarantee they’ll make your stay legendary.